Here are images of work in progress on the Bea Arthur Residence for homeless LGBT youth, as of May 5th, 2016: 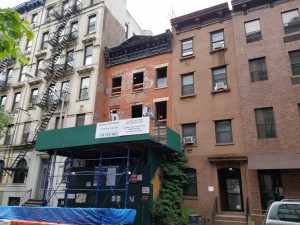 The facade of the Bea Arthur Residence, the old fire escapes and windows have been removed

View of the top floor, new floor joists have been installed

View of the 2nd floor, new floor joists have been installed 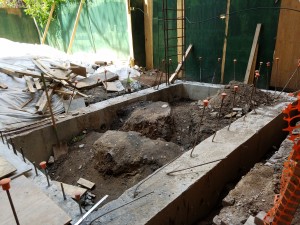 The footings for the rear extension have been poured. Once the concrete slab is poured, the rear masonry wall will be built 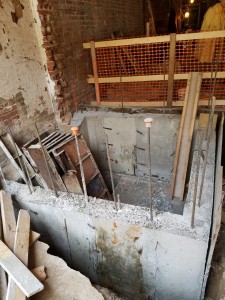 The elevator pit has been excavated and the concrete poured 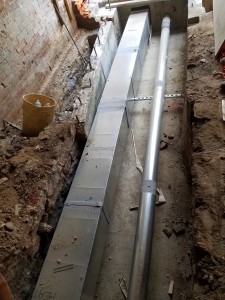 The Cooper Square Committee, a housing preservation organization, and the Ali Forney Center, an organization that serves homeless LGBT youth, have partnered to acquire and renovate 222 East 13th Street in order to provide quality, safe, transitional housing for homeless LGBT teenagers and young adults, ages 18 – 24. The building is known as the Bea Arthur Residence. 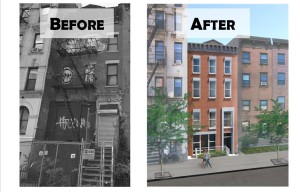 There are an estimated 4,000 homeless teenagers in NYC. According to a 2008 Census survey, up to 40% (1,600 homeless teenagers) are LGBTQ. As LGBT youth come out earlier, unfortunately some of them face rejection by their parents and are forced out onto the streets. These otherwise high functioning young people are placed at risk. They need a safe environment, which this housing will provide, so that they can prepare for adulthood.

Cooper Square Committee and the Ali Forney Center formed the Bea Arthur Residence Housing Development Fund Corporation (HDFC) as part of the solution to this crisis. We obtained a $3.3 million capital grant from the New York City Council and the Borough President in Fiscal Year 2013, and $40,000 in gap financing from private sources.

We hired architectural firm, Magnusson Architecture and Planning to design 222 East 13th Street as a 3 unit building with 3 bedroom apartments to house 18 homeless LGBT youth. This 4 story building is getting an addition in the rear, enlarging it from 4,900 sq. ft. to over 6,000 sq. ft.

Cooper Square Committee is serving as project manager from the pre-development stage through completion of the renovation of the building, right up to obtaining a permanent certificate of occupancy. Upon completion, the Ali Forney Center will handle rent up of the 18 beds and providing the on site supportive housing services to the residents. The Ali Forney Center will occupy the ground floor space.

On June 30, 2015, the Bea Arthur Residence HDFC acquired 222 East 13th Street from the City’s Department of Housing Preservation and Development. Renovation began on September 8th, 2015. After work started, we experienced a 6-week Stop Work Order in late October because the Dept. of Buildings found that the chain link fence in front of the building that had been installed by the City in the year 2000 was done without a permit. We resumed in early December, 2015.

The renovation, which will be carried out by our general contractor, Builders-R-Us Construction Corporation, will restore this historic building, which dates from 1851, and provide a safe home for 18 homeless LGBT youth so that they can live free of stigma and make plans for their future.

If you wish to make a donation in support of this project, you can make a check payable to “The Bea Arthur Residence HDFC” and mail it to c/o Cooper Square Committee, 61 East 4th Street, New York, NY 10003. This project is on a tight budget, and we need to raise another $35,000 to deal with increased soft costs during construction, including special inspection fees and a new City requirement that we file a fire safety and evacuation plan.

Our work managing the renovation of the Bea Arthur Residence, which will provide transitional housing for 18 homeless LGBT youth, is generating a lot of press for us and our project partner, the Ali Forney Center.  A DNAInfo article that gave an update on the project, and its expected completion in February, 2017, has been shared by a number of media outlets, including Broadway World article and World of Wonder.

Monday, July 20, 2015: Welcome to the “groundbreaking ceremony” for the Bea Arthur Residence, an 18-bed residence for homeless LGBT youth at 222 East 13th Street in Manhattan.  The project is sponsored by the Ali Forney Center and the Cooper Square Committee.  The Cooper Square Committee is serving as the project manager from the pre-development phase through completion of construction.  The Ali Forney Center will operate the building and provide on-site 24/7 services to residents when the building is rented up.

In 2012, the project received $3.3 million in New York City Capital (Reso A) funds.  The New York City Council, led by the efforts of Councilmember Rosie Mendez, former Council Speaker Christine Quinn, former Finance Committee Chairperson Domenic Recchia and members of the Lesbian and Gay Caucus secured $3 million in funds, and the Manhattan Borough President, Scott Stringer awarded $300,000 for the renovation of a long vacant building owned by the New York City Department of Housing and Preservation Development. We received a $180,000 pre-development loan from the Contact Fund, and an additional $40,000 in private funds was loaned by the Cooper Square Mutual Housing Association and the Cube Building.  The Bea Arthur Residence HDFC took title to the building on June 30th, and renovations are expected to begin later this month.

Bea Arthur gave one of her final public performances as a benefit for the Ali Forney Center in 2005. She was very upset to learn that hundreds of thousands of LGBT teens were rejected by their families, and driven to homelessness. She said that she would do anything in her power to help these teens. When she died in 2009, the Ali Forney Center learned that she had bequeathed $300,000 to them in her will. At that time, Carl Siciliano, the Executive Director of the Ali Forney Center, pledged that the first building they owned would be named in her memory.

Carl Siciliano said, “It meant the world to me that a star of the magnitude of Bea Arthur would do so much to help the Ali Forney Center in our work of housing homeless LGBT youths. I am very grateful that we will now be able to honor Bea and continue to keep her compassion alive through the establishment of the Bea Arthur Residence for Homeless LGBT Youth.”

In an article prior to her passing, Bea Arthur said, “I’m very, very involved in charities involving youth. These kids at the Ali Forney Center are literally dumped by their families because of the fact that they are lesbian, gay or transgender – this organization really is saving lives.”

Steve Herrick, the Executive Director of Cooper Square, said: “I’m proud that we are developing this urgently needed housing for homeless LGBT youth in partnership with the Ali Forney Center, and I’m looking forward to moving this project to a successful completion.”

The Cooper Square Committee is an affordable housing preservation and tenant rights organization that has sponsored over 550 low income apartments, including dozens of homeless housing units. The Ali Forney Center ( AFC ) is the nation’s largest organization dedicated to homeless LGBT youths, AFC is committed to providing these young people with safe, dignified, nurturing environments where their needs for housing and support can be met, and where they can begin to put their lives back together. AFC is also dedicated to promoting awareness of the plight of homeless LGBT youth in the United States with the goal of generating responses on local and national levels from government funders, foundations, and the LGBT community.

“We approached the Ali Forney Center several years ago and proposed that we partner to develop this vacant city-owned building as housing for homeless LGBT youth, and they agreed.  We’re thankful that the NYC Dept. of Housing Preservation and Development liked the project idea and worked with us to make this pioneering project a reality”, said Steve Herrick, Executive Director of the Cooper Square Committee. The development team for the project includes the architectural firm, Magnusson Architecture and Planning (MAP), the Lawyers Alliance of New York which formed the Bea Arthur Residence HDFC and handled the closing, which took place on June 30th.

Builders-R-Us Construction Corp., a minority business enterprise, will serve as the general contractor to carry out the gut renovation.  MAP’s design involves building an addition in the rear to add over 1,100 sq. ft. of space, allowing for the creation of three 3-bedroom apartments, each of which will house 6 residents.  The basement will house the Ali Forney Center’s staff to provide services to the residents.  The enlarged, 6,000 sq. ft. building is being developed in accordance with Green Communities standards, to maximize energy efficiency.  It will contain engineered bamboo flooring, and other green design elements. The Bea Arthur Residence HDFC is being assisted in developing this green building by the Association for Energy Affordability and the Northern Manhattan Improvement Corporation.

The Bea Arthur Residence will be compliant with the Americans with Disabilities Act, and will include an automatic wheelchair lift to the building entrance in the basement.  It will have a limited use elevator from the basement to the first floor so that one third of the units will be accessible.  Each 3 bedroom apartment will be at least 1,150 sq. ft. with a full kitchen, 2 bathrooms, and a spacious living room.  There will be a laundry room in the basement for residents, and storage space in the sub cellar.  “We’re really excited about the redesign of this historic building”, said Carl Siciliano.  “It will create a warm, home-like environment for our residents rather than an institutional one”.

The project sponsors aim to raise some additional funds to complete the landscaping plan designed by Terrain NYC, install signage naming the building after Bea Arthur, and to cover some soft costs.  “Due to escalating construction costs in NYC, we had to scale back some elements of our architect’s design for the building,” said Mr. Herrick.  Another $75,000 will help us realize our vision for this pioneering project”.

The NYC Dept. of Housing Preservation and Development (HPD) is expected to file the Urban Development Action Area Plan for the Bea Arthur Residence at 222 E. 13th St. with the City Council in the coming weeks. The City Council must pass a resolution designating the project a UDAAP, and authorizing a long term tax exemption, which is a formality since local Councilmember Rosie Mendez is a strong supporter of the project and helped secure $3.3 million for its development. The Cooper Square Committee (CSC) is partnering with the Ali Forney Center (AFC) to renovate a vacant building at 222 E. 13th St. to house 18 homeless LGBT youth ages 18-24. CSC has done the bulk of the pre-development work, and will oversee the renovation, and AFC will rent up and manage the building when it’s completed. Project architects, Magnusson Architecture and Planning are expected to file the approved building plans with the NYC Dept. of Buildings within the next week. “We are hoping to acquire the building by the end of May, and start renovation immediately after that” says CSC Executive Director, Steve Herrick.

END_OF_DOCUMENT_TOKEN_TO_BE_REPLACED

On October 24th, we received a unanimous vote of support (11 – 0) from the Land Use Committee of Community Board 3 for

our proposal (in partnership with the Ali Forney Center) to turn a vacant city owned building at 222 E. 13th St. into housing for 12 – 18 homeless LGBT youth.  Community Board 3’s resolution will urge HPD (the City’s housing agency) to grant us site control so that we can apply for the funds needed to renovate the building.  We appreciate the support of the more than 500 people who signed the petition in support of our proposal.  We will continue to need community support to move this project forward to a successful conclusion.  There are over 1,500 homeless LGBT youth in NYC, so this is a small, but important, step in addressing the larger crisis. Get involved.  Help make a difference!

If you want to help do outreach to garner further support, contact Steve.